An Interview with Steven Saylor 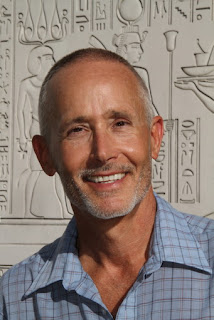 MM: Steven tell us about the genres you write?

MM: Tell us about your writing schedule?

SS: The best thing about being a writer is sleeping late and setting my own schedule. My books begin with a months-long research phase, which is all about reading, taking notes, and tracking down obscure sources. Once I start the actual writing, I’m good for a six-hour day; after a certain point, the writing gets sloppy, so I have an excuse to knock off early. The only time I work long hours is when I’m designing the maps for my books. It’s so long between maps, I have to relearn Adobe Photoshop every time out, and I get totally lost in the joy of creating the graphics, like being a caffeine-crazed student again.

MM: Your favorite place to write ?

SS: I’m a swimmer, and I love nothing better than going to my favorite pool in the summer (nearby Clarke Swim Center in Walnut Creek, California), swimming a mile, then relaxing for a couple of hours in the shade while writing on my laptop. I feel like a Hollywood star writing his memoirs.

MM: Give us the backstory on your writing career?

SS: I loved books as a child and I always wanted to be an author, from the very first time I was asked what I wanted to be when I grew up. I also loved the ancient world, from all the movies that were big when I was kid, like Ben-Hur, Spartacus, Cleopatra, and all those Italian gladiator movies with Steve Reeves. When I went to college, I majored in history, which felt terribly self-indulgent, I enjoyed it so. After doing this and that (newspaper and magazine writing, reviewing, etc.), in my late twenties my love of crime fiction and my love of history combined when I read Cicero’s oration for Sextus Roscius, accused of parricide, and saw the potential for a mystery novel. After Roman Blood came out in 1991, the publisher invited me to write a sequel, and the “Roma Sub Rosa” series was born. 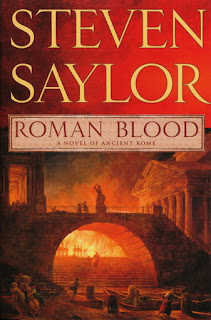 MM: Do you ever reread your favorite books?

SS: I used to do this when I was younger, but it’s been a long time since I reread a favorite book. The last instance was Lord of the Rings for the third time, long before the movies came out. I was more impressed than ever by the poignance and majesty of Tolkien’s achievement.

MM: Is there an author or writer who had influence on your chosen career?

SS: Tolkien. But I didn’t become a fantasy writer, precisely because it seemed to me that Tolkien had reached the pinnacle, and I didn’t care to be a copycat. But the world-building I’ve done over the course of the 15 volumes of novels and short stories in the “Roma Sub Rosa” series is very much influenced by Tolkien; it’s just that I don’t have to make up the back-story, it’s there in the ancient sources.

I should also name Mary Renault, whose novels about ancient Greece were hugely popular when I was young and set a standard for historical fiction. She also presented the sexuality of the ancient world in a true light, making it clear that sex and love between men was an essential part of the culture, and that was a great comfort to a gay boy growing up in Texas in the 1970s.
MM: What comes first: the plot, setting, characters or a conflicting situation?

SS: I’d say a combination of setting and conflict. For example, my first novel, Roman Blood, was inspired by Cicero’s first big murder case, defending a man accused of murdering his father. That drew me into researching everything that was going on in Rome in 80 B.C., and then, to explore the mystery, I created Gordianus the Finder. Subsequent novels have always been built around some real event. The ancient sources never fail to give me juicy material and larger-than-life characters, whether it’s Cleopatra or a corrupt politician or a radical conspirator plotting the downfall of the Roman Republic.

MM: Breakdown how you write your books?

SS: First, the germ: the historical event in which I see the inspiration for a novel. Then the research, where I get to play detective, uncovering all sorts of clues and connections. Then the actual writing, which works off all the notes I’ve made regarding the historical details, the character traits, and the crucial plot points. I always discover new connections and motives during the writing; it’s as if I’m on a therapist’s couch, uncovering subconscious links. Once I finish the novel, I let it lie for a while and then do a complete read-through, which usually entails only minimal rewrite. Then the book goes off to my editor.

MM: What comes next in 2016 and tell us about your latest books? 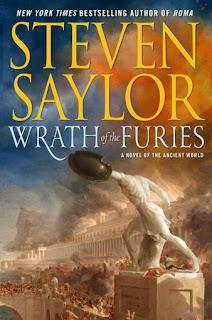 SS: My latest is Wrath of the Furies, which takes place in 88 B.C. Young Gordianus is lured to the city of Ephesus, even as the conquering King Mithridates is plotting to kill every Roman in Asia Minor—every man, woman, and child—in a single day. It’s turned out to be the timeliest novel I’ve ever written, dealing as it does with history’s first massive ethnic cleansing, and with tens of thousands of desperate refugees (Romans) streaming out of Asia Minor (modern Turkey). History repeats.

Next I’ll return to the older Gordianus, with a novel I’ve long been plotting, set against a huge event: the assassination of Julius Caesar on the Ides of March, 44 B.C. There’s another murder that took place at the very same time, and that’s where the mystery lies.

MM: If you were going to sit down with five authors (dead or alive) what would you ask them?

SS: Tolstoy: Did you ever fall in love with another man, as I suspect? Lawrence Durrell: Did you commit incest with your daughter Sappho, as some people think? E.M. Forster: Can we hang out? Homer: Did you create both the Iliad and the Odyssey, and were you really blind? Sophocles: How did you come to write the world’s first murder mystery, Oedipus the King?

MM: Are there any TV shows that you binge watch?

SS: I’m a huge fan of crime dramas from the UK, Scandinavia and elsewhere in Europe. Many can now be seen via a new service called MHz Choice, which I very much hope succeeds. I’d say the original Scandinavian series The Bridge is about the most brilliant thing ever on TV, both seasons one and two, and now there’s a third season.

MM: Be our tour guide and tell us about where you live?

SS: I live mostly in Berkeley, California, a college town with great food and amazing cultural resources, from the renowned local theater to the UC Berkeley libraries. There are also miles of running trails up in the hills. My husband Rick and I also have a condo in Austin, Texas, where we met long ago when I was a history major at UT. I loved the summer swimming holes and the slacker lifestyle so much that I’ve never been able to give them up, and that draws me back several times a year. Another town with great food and liberal culture.

MM: Do you have favorite conventions or conferences that you endorse?

SS: I’ll give a shout-out to Left Coast Crime, which takes place in the western half of the US every year. I’ve also had a great time at the Texas Book Festival in Austin, and at Saints & Sinners, a GLBT conference in New Orleans. I’ve also attended many an academic conference over the years, mostly as a guest speaker to a room full of Classics scholars or history teachers, who love the ancient world as much as I do. They really get what I do.

MM: What ways do you have to eliminate stress?

SS: Running, swimming, working out with weights. That’s when I do some of my best thinking, when I’m hardly aware that I’m thinking.

MM: Do you have a favorite place to vacation?

SS: London! All the allure of foreign travel, and they speak English, so I can take full advantage of all the great theater and other cultural riches. I love that town.

MM: What would your characters tell us about you?

SS: All my books are an act of autobiography done with mirrors, dealing with my own preoccupations and stumbling blocks; all the characters in the books, good and bad, come from my own psyche, and Gordianus is very much my alter ego, an idealized moral version of myself. I think this sort of thing is true of almost every writer.

MM: When you're not writing what do you like to read?

SS: I am greatly saddened by the death of Ruth Rendell, because that means there is only one more of her books for me to read, published posthumously. We had dinner in London once, and she’s long been a favorite of mine. I also read a great deal of ancient literature, purely for pleasure, such as the novels written by the ancient Greeks themselves, of which only five survive intact.

MM: Lastly, leave us with what you want your readers to take away with them about your books? What would you like to say to your readers?

SS: Be skeptical of sources—that was one of the most fundamental principles I learned from my history profs, and it has served me well in every aspect of life. Always look for the subversive reading of the accepted text, as Gordianus does when he confronts a mystery. He never takes things at face value; there’s always more going on than meets the eye. The overarching theme is there in the name of the series, “Roma Sub Rosa”—a secret history of Rome, or a history of Rome’s secrets, as seen through the eyes of Gordianus.

Can you leave us with a favorite writing quote?

SS: My favorite, because it makes me laugh—and because it totally demystifies the process—is from Gore Vidal: “First coffee, then a bowel movement. Then the Muse joins me.”