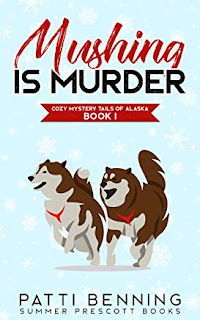 Angie heads back to her childhood home in Alaska after troubles in her life as well as to help with her mother who has Parkinson's.  Her father raises, trains and runs dogs in sled races as well as running the family diner.  Soon after her arrival, a neighbor shows up in the Diner looking for her father because a sled team has shown up on his property without a driver.  She and the neighbor head out to find out where he is only to find his body.  After thinking it was an accident, the Sheriff comes around to question her dad as a possible killer since the victim was his best friend.  She starts asking questions to find the real killer.

I enjoyed the book a lot because of the setting, characters and yes - the dogs. LOL  the thing is the mystery part was really weak, but that's okay because I did enjoy it.  Maybe book two in the series will make up for it with a better mystery.  I think part of the problem was the length - a bit longer, more clues or suspects and motives could have been provided.
By Terri P - February 27, 2019 No comments: 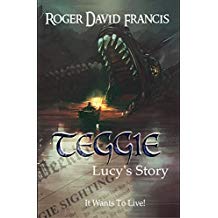 I was really intrigued by this book.  I had never heard of the legend of Teggie in Lake Bala.  I have to say that this version of Teggie is truly horrifying and evil.  That part of the book was excellent, as was Ben's descent under Teggie's control.  Where the author lost me was Lucy.  It is her story - as she watches the man she loves obsessing over a monster and behaving in worse and worse manners.  A great story.  BUT.... She turned out to be a protagonist I truly despised.  She repeatedly made excuses for Ben, thinking he will "get over it", even as things progressed to more and more hideous violence.  Making excuses.  HOPING he would be able to fight Teggie's influence.  Passive and pathetic.  Even as Ben was nastier and nastier to her and others.  After crimes were being committed.  It was a visceral feeling. Grrr...  I was glad when it was over so I wouldn't have to deal with her any more.

That said,  Ben's descent and Teggie were great.  Additionally, the book has many other Teggie/Lake Bala tales which were quite interesting as well.
By Terri P - February 25, 2019 No comments: 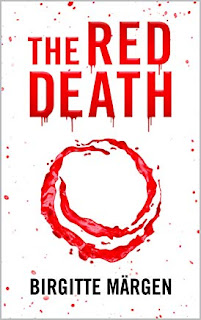 Cases start emerging in NYC where the victims are dying of a bacteria similar to the Black Death of the Middle Ages.  Only this pathogen is 100% fatal.  The CDC investigates and find an ancient bacteria that one professor's career had been destroyed over when no one believed his findings.  A search for a natural cure takes the Professor and a CDC researcher to the Amazon while the plague starts spreading quickly throughout the world.

The story is told by multiple POVs including some of the first patients, showing the method of the spread.  It is a story that is chilling because of how easily we could see this happening today. 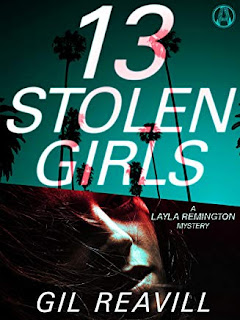 After an earthquake in LA, Detective Layla Remington finds a large broken barrel with a body inside.  It turns out to be a missing actress and a HUGE missing persons case.  Only she sees connections to other missing girls' cases that none of the powers that be see.  As she investigates, she treads on some powerful toes in the Motion Picture Industry and gets in deeper than she expects.

The interesting thing about the "Cor" series in this book is that it clearly is a nod to the old Gor books.  Nothing I ever liked, but I had a friend WAY back when (30ish years ago) who LOVED them and she started writing one of her own.  Early fan fiction I guess.I had forgotten all about that until reading this book.

Very suspenseful and interesting.  I really enjoyed it
By Terri P - February 11, 2019 2 comments: