Review: Death of a Neighborhood Witch by Laura Levine

DEATH OF A NEIGHBORHOOD WITCH

A new hunky neighbor has Jaine and lance at odds. However, what is really odd is another neighbor. Cryptessa Mulddon is an actress from the vintage era and when she is not causing chaos she is busy talking to her stuffed raven. She had one friend in the world and jaine's cat Prozac just scared Cryptessa's bird Van Helsing to death.

If all of this isn't enough then Jaine's client Marvelous Marv, has decided to do away with his mattress king crown to which he is always threatening to eat. Now he wants bedbug ads and this is another nightmare and not on Elm Street.

When Peter Conner decides to have a Halloween Party and invites Jaine it isn't long before Jaine and a dead body are once again strange bedfellows.

The neighborhood has more rumors flying around than Jaine's own father can invent as he is sending emails that alarm her but she doesn't have time to worry about her dear father's antics as she tries to uncover the truth about why Cryptessa departed life way too early for her. Not early enough for others.


DEATH OF A NEIGHBORHOOD WITCH will have you thinking twice about neighbors and costume parties.


I laughed till I cried the other night and this is a perfect blend of characters, humor, mystery and fun. No book should be this much fun to read.


I give this one a ten star salute.

Halloween Week:
I have to admit this is one of my favorite week's of the year. I love fall but Halloween week seems to add just the right amount of mystery. I am having so much fun watching all the mystery movies and reading a really fun Halloween Mystery. Death of a neighborhood Witch by Laura Levine.
But to be honest my horror that scares me to death is not spooky mysteries. it's more real life than that topics like spiders, serial killers, tornadoes and other natural elements of mother nature. Those are the things that scare me to death.
I have been job hunting this week. I haven't worked in twenty-two years. This also scares me to death. So much has changed since I filled out a job application. Spooky doesn't begin to cover it. However, I will say that it is becoming easier each time I meet a new challenge. I have renewed confidence in myself.
Okay because I am me I will ask...
What scares you?
Hugs,
Pam
By Terri P - October 29, 2013 3 comments:

A Month Full of Water and Dogs. And Books.

Okey-dokey, the reason I write this blog every month is to, with luck, sell books. So don’t forget that all my Daisy Gumm Majesty books are available on Kindle and Nook! Here’s the link:

Also, here’s the updated cover art for SPIRITS REVIVED, Daisy’s seventh book, which will be published by Five Star in March 2014. I love this cover. It looks ever so much more twenties-ish than the first rendition did: 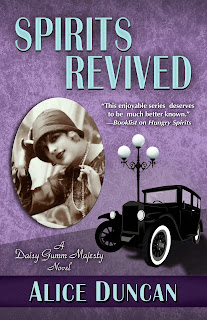 Then, merciful heavens, we actually had RAIN in September. Seven inches of it in a single day, actually. That was a teensy bit too much, as you can see in the following photographs. You can see the sunken garden in Cahoon Park as it’s Supposed to be and as it was after all the rain on September 12. It looks like it’s supposed to now: 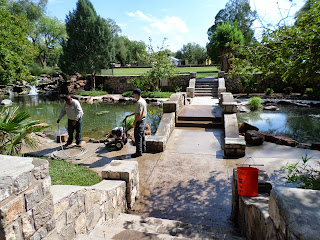 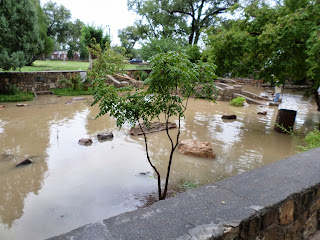 After three years of drought, this water came as quite a surprise. Here’s a picture of the desert, where the Pecos River overflowed. For the past several years, there was no water at all in the Pecos River:

And then there were the dogs. I was down to one foster dog (Mr. Sausage) when suddenly I was asked to take in Santana, who was actually FLOWN to Roswell by a flying saint-type person. Then Cindy, who had been adopted, decided to eat her new owner’s Chihuahua, so she came back to me. Cindy’s a sweetheart, and so are Mr. Sausage and Santana, but this means I’m caring for eight dogs, which is at least five too many. Sob! 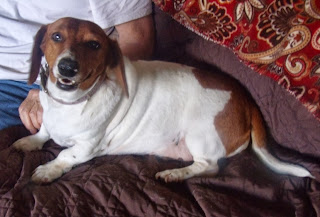 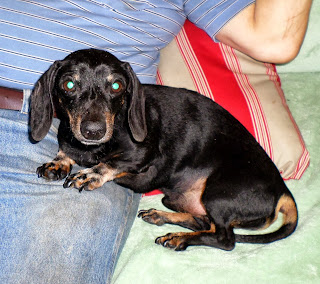 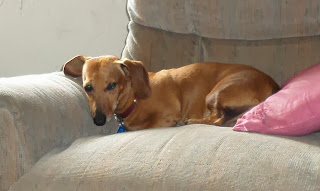 To top it all off, a woman in Belgium who has a doggy rescue site on Facebook, discovered the photograph of a miserable little doggy that was being held at Roswell Animal Control’s shelter. Her time was about up, so one of my Facebook friends, whom I don’t know in person, sort of volunteered me to pick up the dog and do something with it until her new mommy, who lives in Florida, can work out transportation. Thank GOODNESS my good friends, the Laskys, agreed to foster this little girl, whose name is now Coco. You can see why everyone was concerned. Her Animal Control picture is truly pitiful. But she’s happy and frisky now: 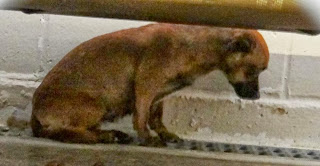 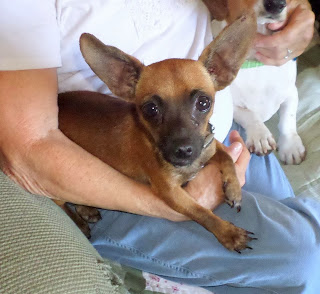 I don’t know why I attract dogs, but I do. I guess it’s my fate. Or my rotten luck or something. Maybe it’s Karma. Maybe I baited bulls in another life. Whatever it is, I wish it would stop.

But what the heck! Please enter my October contest, in which I’ll be giving away a couple of copies of ANCIENT SPIRITS, Daisy Gumm Majesty’s sixth adventure. If you win, you may have it in hardback or as an e-book for Kindle or NOOK. If you want to enter, just send me an email to alice@aliceduncan.net and I’ll throw your name in
By Terri P - October 16, 2013 No comments:

Hanging Hannah, begins with a young woman running through the wood that are alongside the local inn. She is a beautiful creature and then there is a birthday party taking place at the inn for Jane's Stuart's son.


The children are taken for a walk in the wood and hanging from a tree is the beautiful young woman. She is dead and then the real mystery begins.


Who is this young woman and who would want her dead?


As the investigation begins Jane is only to happy to delve into her stack of manuscripts and when Holly Griffin another agent brings a deal to Jane to represent Goddess and famous singer, actress and author. Jane is stunned and really needs to make this happen.


However Goddess disappears and another meanwhile Jane's assistant Daniel has his own problems. His live in fiancé is pregnant. Daniel finds himself planning a wedding, Jane is roped into helping the bride Laura with wedding dress shopping and Daniel feels he must make amends with his father.


This happens his father attends the wedding only to drop dead of a heart attack.

I have to say this is a powerful mystery. There are many layers to the story and the reasons behind each and every murder is more of a surprise than 'who the murderer was. I think HANGING HANNAH should be taught in creative writing classes across the country. It's that damn good.

Review: Murder is a Piece of Cake - by Elaine Viets


Josie Marcus is getting married.  And her boss has given her a 'present':  mystery shopping jobs with wedding-related stores.  In one she meets Molly, who is also getting married to a man named Ted.  Only she later finds out that Molly is a very crazy stalker when she show's up at Josie's Fiance', Ted's vet clinic in full bridal gown expecting him to marry her.  And if that isn't insane enough, Molly is later shot and killed by Ted's mother's pearl-handled revolver.

So not wanting her own wedding halted, Josie sets out to prove who really did kill Molly.

I love Josie and her dilemma, and was really happy that she didn't doubt Ted's fidelity for one moment. Her investigations of a strange situation in an already strange industry were often amusing.  Weddings can indeed bring out the worst in people.  A very fun read. 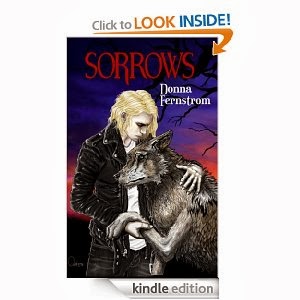 Jay is a newly made vampire.  The vampire who kidnapped him, tortured and abused him, scarring his psyche.  Jay is damaged and fragile and hungry and is found by a group of vampire law enforcement where he is taken in.

When I say Jay is damaged, I mean really damaged.  Great fear and guilt.  Barely able to feed without a meltdown. Sometimes despite sympathy, I was really annoyed with him.  And yet I still wanted him to get better.

There is a lot of world building in the book as well, Rael Shaa (werewolf like companions), dimensional travel, Mages.  This is the part that really intrigued me and left me wanting more.

The horrors of the evil vamp and his victims were intense as was the scene when they caught up with him.  There were a lot of elements that came together nicely for me, despite an intense to shake Jay and some of the vamps who were supposed to be helping him.  But I was totally engaged in the story and that is what I loved.

What food do you never ever want to see on your plate? I


I have two one is shrimp. I don't like it and yes I used to live in the south and I know it's a staple but not for me. The other is liver. My mother tried to make me eat it years ago and there was a scene. (I was five years old) and I never want to see or smell it again.


What are your picky foods?


Can you come up with a mystery title for the foods you don't want to see on your plate?